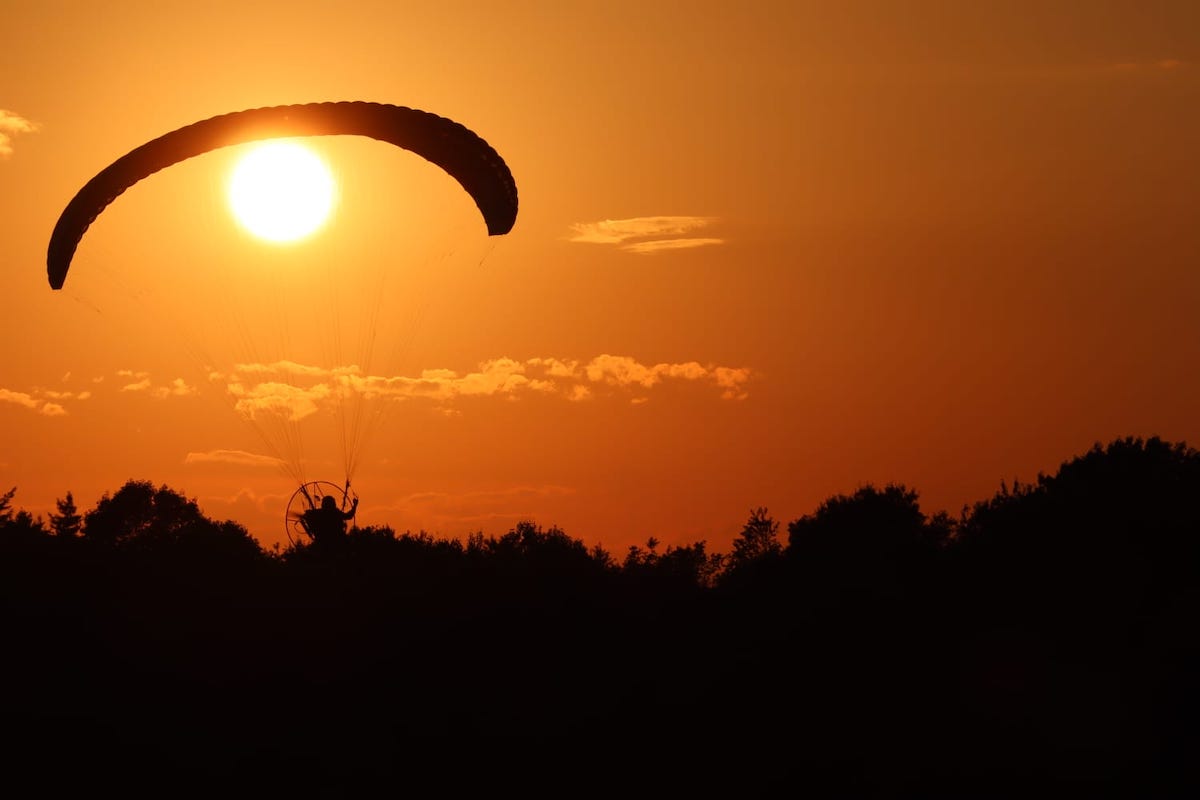 Paramotor is in My Soul

Midwest Parajet helped make my dream come true! Scott & Steve not only have a ton of experience in all aspects of paramotor, they are fantastic instructors. They are dedicated to helping us fly. Their facilities and field make an atmosphere where learning is easy, including a large, smooth runway.  There are many sights to see in our local flying area. The group goes on many trips to amazing destinations where you can expand your flying experiences.  Most importantly, Scott & Steve are friends and there is a great sense of community among our group of pilots. Learning to fly paramotors with Midwest Parajet has been one of the best parts of my life.

Ever since I was a kid I always dreamed about flying. I used to steal some of my mothers sheets to try and form a makeshift parachute then me and the neighbor kid would run off the roof of our house and try to catch a few seconds of flight. Unfortunately we always hit the ground before we wanted to but we never stopped searching for the ability to have the freedom of flight. Later in life I still had a strong desire for catching some air and got into kite boarding and kite skiing with a big wing. Then I saw the new sport of paragliding with a motor on your back and would see guys flying over the corn and I knew that I had to one day try it out.

Had some time on my hands a few years ago and stopped by to meet the boys at Midwest Parajet.
Scott Baxter and Steve Reed are great guys and some of the best instructors that I know. First time I met them and hung out with them for a bit felt like we had been friends for years. They offered me to go up on a tandem ride and that’s all it took. Once I was 100 feet off the ground I was hooked and had to get one. So that summer I bought a maverick and started training with Scott and Steve. The excitement that I got from training brought back memories of being a kid and that excitement of trying to run into the ski like we used to do off my parents roof and actually fly was about to come true.

Once I took my first Solo flight I was on cloud nine couldn’t believe I was actually doing this! It’s the best feeling in the world to literally be able to live out your dreams and run into the ski and fly like a bird wherever your hearts desire is to go.

The next year I flew all summer with the guys, we flew some awesome cross countries and saw some amazing sites and made a lot of good friends at Midwest Parajet. Everybody’s so upbeat and exciting to hang out with it’s hard to explain the good vibes we get hanging out but I guess who wouldn’t be happy because we all get to fly.


Thanks a bunch Scott and Steve for making my childhood dreams come true! 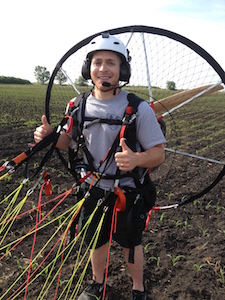 I cannot put into words how incredible my experience was at Midwest Parajet. I could not have asked for better instructors than Scott and Steve! They make you feel so comfortable and make you an expert at ground handing before you take your first flight. Most importantly, they become great flying friends! Their location is second to none, with a massive flying field to provide safe takeoffs and landings. No matter how fast or slow you progress, they are extremely patient and make the learning process fun and stress free. My only regret is not calling them sooner! They sell the best of the best equipment and are always a helping hand long after you finish your training. They have given the greatest gift, human flight! I’m hooked.

My experience with Midwest Parajet has been terrific. My Dad and I were interested in flying safely for fun at a relatively low cost and we settled on flying powered paragliders. I fly all kinds of different aircraft, from corporate jets to helicopters and I am also an airplane flight instructor. I initially looked into going to a “hurry up” course out of state where they say you can become a Powered Paraglider pilot in a week and in retrospect, I am so glad that we found Scott and Steve at Midwest Parajet. They are a fantastic team and were willing to talk about all of my concerns and give me a realistic picture of becoming a PPG pilot. I was very concerned about safety and I learned that the instructors Scott and Steve have safety set as their first priority. I learned how to “fly” my wing, which is done without leaving the ground in a few weeks with Steve working very patiently with me as if I was the only student there. After those few weeks Scott was already walking me through my first solo powered flight. My dad and I learned together and we fly together all of the time. Our number one goal is being safe but our number two goal is to have a relaxing and fun time. There is nothing like flying along a little before sunset about 15 feet above the fields literally flying. I don’t think that any form of flying I have done has gotten me this close to feeling like a bird. This has been a truly amazing, fun, and safe experience.

I am a 66 year old retired man that only has one leg from a hunting accident when I was a young kid. Recently, I wanted to learn how to fly powered paragliders with my son. We went on-line and discovered two local instructors (Scott Baxter and Steve Reed). Both instructors were very optimistic saying that they could help me learn how to “kite the wing” and eventually fly a quad. I was somewhat skeptical, but had a strong desire to fly, so I decided to accept their offer to teach me. Steve Reed spent several hours pushing my quad while I was learning to “kite” the wing. Pushing the quad and trying to teach me to kite the wing was hard work for Steve, but he never complained. When Steve was unavailable, Scott would also help me. After a few weeks, I was ready to solo. Steve made it real easy for me to fly the first time by myself. He was talking to me the whole time through a radio system. Both Steve and Scott made sure that I learned how to fly in a safe manner. They are not a “hurry up and get done” type of instructors, but rather they want you to learn how to fly safely. I know fly with my son, who also learned from Scott and Steve. We fly for hours at a time watching the corn and beans grow under our feet. We have seen many deer and coyotes. We also have seen bald eagles. We get lots of waves from people on the ground. I assume that they are looking up, wishing they could fly. That’s what I used to do.

Some pictures I was able to experience because you and Steve taught me to be a PPG pilot. You guys have no idea how happy I am to be able to do this after 15 years of having it on my bucket list.